To round out my star assignments for this week I completed the Design a License Plate assignment worth 3 1/2 stars. I thought this was a good one that I could use along with out theme with my Agent. The one issue I ran into was that my agent’s whole thing is that she is kinda boring. So the idea of a vanity plate seemed a little off but I went with it anyways. I remembered in elementary school using the Virginia DMV website to create license plates so I went back there to look at the site to see if that was still an option. When I navigated there I found they had an interactive form for creating a novelty license plate. Thats when I had an idea what if I created a license plate that could be a novelty gift to my character so it reflected how people perceive her. I started going through all the different hobby and other types of plates trying to figure out what would be a generic kind of plate that still was not the absolute standard one. While I was clicking around it hit me, when I found the heritage plate that it was perfect.

This plate used to be a generic plate that people would get (I think from what I found) but regardless it is one you frequently see on the road. It is slightly different but still sticks to standard Virginia themed imagery and is not overly flashy. Perfect got the plate down, next was to decide on the words. The act of creating a vanity plate usually is because you have something interesting you enjoy or support. Again boring is her thing but I went back through my description and thought about it paperwork came up as something she does enjoy. However being a strict person she would want everything with proper spelling so that was too long instead I went with simple “Papers.” It was to the point it expressed something she does enjoy and it makes sense. Plus in the context of agent fawn receiving the license plate as a gift from others it would make sense that paperwork would be something other people would realize she enjoys and potentially be a bit teasing as well. (Which she would not take offense to.) I’ll admit I thought this assignment was going to be much quicker than it actually took but because I wanted to try and get it to really be meaningful and not just random it took awhile. Which was good though because it gave me more time to critically think about my character! 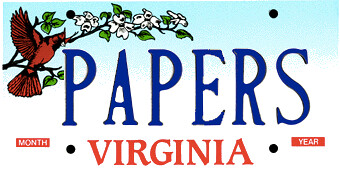