The Character Word Cloud assignment worth 3 stars, was all about creating a word cloud for your particular character. (Though the example was a tv show.) The suggestion was to use wordclouds to create it. I decided to use the assignments I had already written for my character to fill up the the words, including the original character dossier. So I first used this site and went through all my posts to use what I had written about Agent Fawn into the list of potential words. It presented a very bright blob. Now bright messy blob did not strike me as something that well reflected my character even if the words might so I started playing around with the different portions of the word cloud. For instance I set the color to be all grey scale because I felt that gave a more appropriate tone. I also noted that you could mask the words into a shape so I picked a file folder again because it felt rather appropriate. Except when I picked it it turned out that I did not have enough words to concretely fill up a file folder so I decided to include the outline of the mask to make it more clear what the shape was supposed to be. Here is what I came up with. 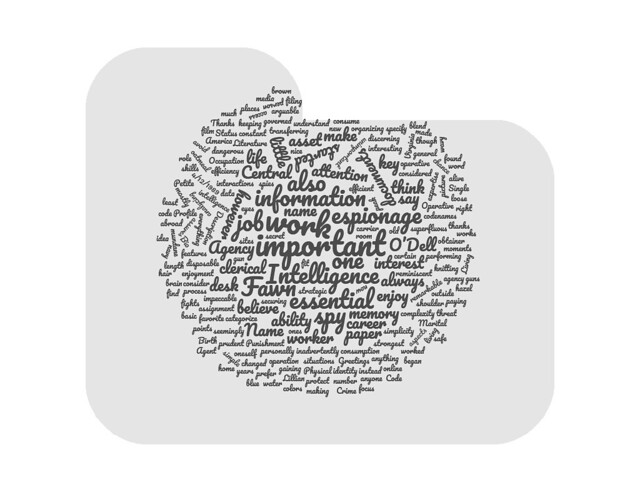 Now I could have been done here but I just still felt like it was missing something so I decided to use another tool Voyant to see if I could get different ranged results. Now Voyant actually does a lot of other things than just word clouds, it also can track frequency of words, phrases, exact numbers, and more. However I just used its word cloud function for this assignment. Here again I also played around with changing the colors from neons to a more muted set. (Voyant had less options in color range and none in shape, it changed shape based on number of words you told it to include.) So I got a second word cloud.

I think by having the two different word clouds it shows how even though they use the same words the context feels different. The greyscale file folder design has a much more quiet side to it, while the Voyant cloud keeps the emphasis solely on the words itself. For those reasons I found it more constructive to really understand the character from both perspectives and the ways that words have different feeling from the design.