I decided to do the Four Icons/One Story project worth 3 1/2 stars. Realistically I decided to take on this project because I saw they included the Noun Project and I really think they have awesome stuff on that site. (I even wrote an article on the Noun Project for work.) I was really excited to try and come up with something cool that I could create with a movie. Now I know we are not supposed to give away the movie we picked and I won’t but know it took me forever to come up with one that I could simplify into just four icons and still be happy with it.

Since I pulled icons from the Noun Project I have left their attribution in small print inside my design. That is because the Noun Project asks you to purchase a one time fee for any icons you wish to use that does not require accreditation. (The fee going to the icon creator.) Since I was not looking to use any of these icons again I decided to use the free version and maintain accreditation. (I know technically I could’ve just cropped it out but I wanted to honor the Creative Commons license.)

I brought all of the icons into a blank photoshop file and arranged them in the order that I thought would best convey the story. I tried out several different icons for the same concept to see what looked most aesthetically pleasing, mostly based off the clearness of certain icons or the line art.

Any guesses what it is? 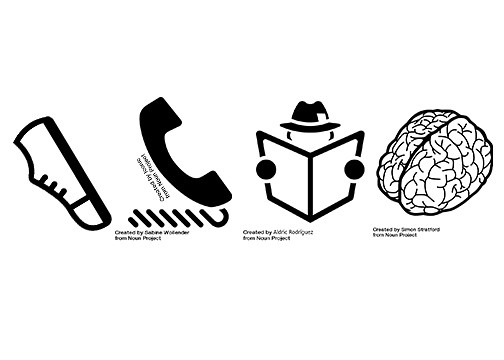