Agent Zero is on a mission. Director Bond of DS106 Headquarters asked Zero for her help in finding out who has been spying on the DS106 agents for the Directorate. The Directorate recently interviewed DS106 agents and concerns sparked that she had a secret mole among the operatives. Agent Zero enlisted the help of Agent Fawn to search out and find who really is working with the Directorate.

Later that same day Agent Zero received an envelope from Agent Jones whom she had previously teamed up with on a mission. Inside the envelope was a faded name tag from the office of the Directorate. 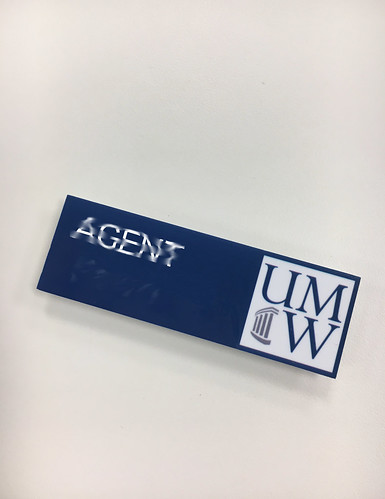 Even with Agent Fawn’s offer to take over finding leads about Agent Jones, Zero could not help herself from continuing her own secret research. That was how she found the accountant. The accountant claimed to have the name of the Directorate’s mole. He had been closely monitoring other DS106 agents as a part of a mission he was on to catch any agent leaking information out of the agency. He agreed to meet Zero in person under the rule she showed up alone.

The accountant did not stay long he pointed to a envelope under the bench. He then stood up and left without a word. Zero opened up the envelope when she got back to her office to avoid any secrets being exposed. 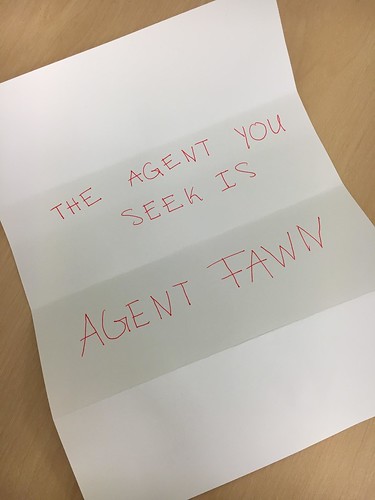 Three agent’s she trusted now had come to Zero claiming Agent Fawn was the mole. But Zero knew if it was true she would have to catch Agent Fawn in the act so she set a trap.

Zero got to the Center of Convergence earlier than the time she had told Agent Fawn. She knew if Agent Fawn was really the mole she would come early to and try to assassinate their supposed contact. As she walked through the doors of the building she spotted Agent Fawn. They made eye contact. They both knew. Suddenly Agent Fawn took off into a stairwell and Zero knew she had to follow.

Zero’s training paid off and she was able to catch up to Agent Fawn at the top of the staircase and confront her.