The second week of the radio show and the final for that matter was a little stressful at first. We had not written our script yet as of the weeks start so I was a little nervous but we got it together fast! Agent Heather suggested to the group that we all try to meet in the google chat of the google doc for a few minutes live to hash out some ideas and fully dive into script writing. Scheduling with group projects is always difficult but we tried to give time to talk with one another. Originally we had all really wanted to get together and record together (for consistent audio quality) but realized that some group member schedules were totally opposite to others and it was looking unlikely. So when writing the script we decided to come up with a reasoning for the differences in our backgrounds. We decided that our agents would all be out on field missions calling into the show. So we would add sounds to replicate phone static in a sort of conference space. This idea actually brought out a really cool idea that we decided to integrate into the show. We decided that each of our agents would be calling in from one of their missions asking for fellow agents support in solving their mission. It was a way to introduce who our characters were and the types of missions they were involved in. It was also a way to encourage interactivity with the broader class. Throughout our radio show we encourage the audience to tweet out their ideas on the best next step on our mission. Leaving it open ended allowed us to get the class interacting with our stories but also made it so we did not have to write alternative endings based on choices. Instead it is left more open ended like an advice show. I personally was excited about the format because it made it more fun in a way we thought the audience would enjoy. For us as a group we liked the idea of coming up with a way to have people respond to the show and the stories we told in a way that was fun and did not feel like work.

While writing the script we decided each of us would write out the dialogue for our mission overview to make sure our character’s voice showed. Then we each picked a mission to respond to, we wanted to make sure the show still had us communicating with one another and was not just a series of short blurbs that had no connections. By setting the show inside the network of agents looking for support it made sense for our agents to offer their own suggestions to one another. While we worked through script edits I went and created a twitter account for the show so we could all tweet out to people talking about the show. (We ran into a slight hurdle when twitter thought the account was spam but it was a simple fix.) We also set up a schedule to tweet out those design materials we had each made last week to populate the twitter with content and prepare people for our show.

Since I knew we were going to want to incorporate our twitter account more into our radio show I went through and tried to follow everyone in the class. Next I decided we might need some more visual content for our twitter account so I went ahead and created a few more designs specifically for the account. I of course started with the design resources that the group awesomely put together for the project. From there I created some minimalist examples to add to our content without creating spam. (We wanted to make sure it did not turn into something annoying but was still fun.)

Here are the designs I created! I used canva to create all 3 designs and mostly pulled from their gallery of available icons. For the radio though I used a noun project icon and included it’s attribution in the image as per the creative commons license agreement. 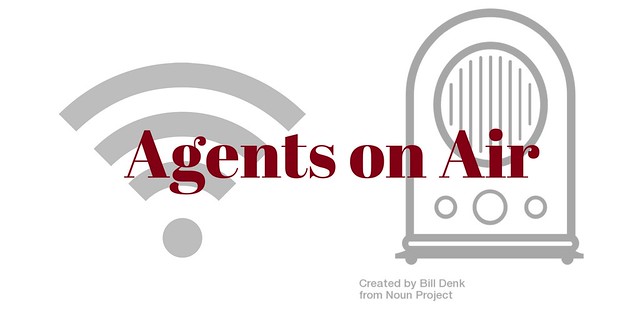 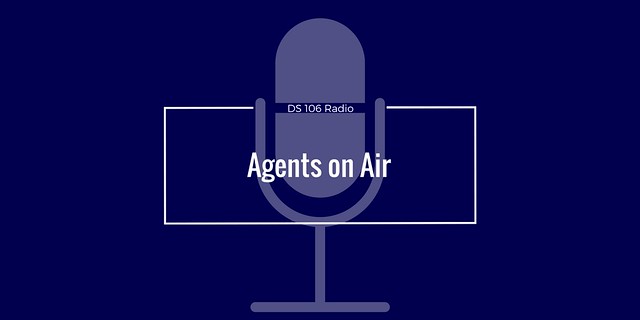 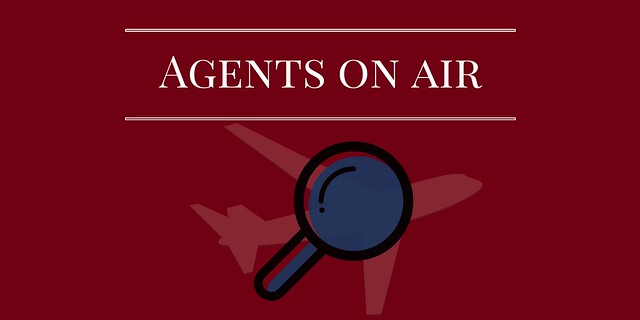 Next we did the actual recording, Agent Amari and I were able to meet at the same time so we both recorded in the Audio Booth at the Hurley Convergence Center taking turns recording our bits. Everyone else recorded their parts and we put the recordings all together to match everything up. Agent Heather took all of our recordings and put them in the proper order. She also listened through and edited out some excess sounds from the clips. At that point she shared it with our group and we all listened to the baseline version and decided how we thought it could be improved and what sort of backgrounds sounds and music was needed.

I next went through and added the background sounds to our broadcast. I went and looked for background music with a  proper license to share and to use in our broadcast. I also looked at sounds for phone static. Agents Amari and Katey both recorded in a way to make their voices sound on the phone so I left their audio mostly alone in terms of background noises. Originally I had planned to add static back into Agent Heather and myself’s broadcasts but I couldn’t get a very authentic feel to it. So I talked with the group and came up with the idea to use background music behind those recordings. So it would be like two agents were in transit on mobile devices while the other two were inside rooms with ambiance. It also helped give our broadcast some variety. The background music for Agent Heather’s was an Ouverture by Gables, and the background for my agent was Children of the Son (instrumental acoustic) by PC-ONE. Throughout the show I tried to find standardized sounds to make our broadcast sound as cohesive as possible. (Especially since everyone did not have the availability to work in as quiet of a place as the vocal booth.) But it turned out actually since we were going for a phone call theme people who recorded on a phone did not need static or other elements added back in.

In the process of adding those sounds back in I made a unhappy realization. We were under the time limit for our broadcast. Now earlier we had a scare that we would be under time limit so agent Heather and I recorded an extra gossip section to end out the broadcast thinking that would push us over the limit. (Since we had not added in commercials or bumpers yet.) Agent Heather then sent me the complied list and I went to add the opener, closer, commercials, and bumpers. Agent Amari made a great opener and I remixed some of her content from the opener into an closer as well. Unfortunately in this process I realized that I had been the only one to create commercials. I had created two commercials but that was all we had. So I reached out to Agent Katey and she said she would create another commercial for the project which helped a lot! She then offered to create another commercial to give even more time! (Those two really helped.) At that point we were still just a tiny bit short. So I went back and found an old script I had written for a commercial that had never been recorded and created that commercial. I also made a bumper specific for our show and with that we were finally at an appropriate length!

Once at the proper length I went through and made sure that the background music and sounds properly lined up exactly with each persons dialogue. I listened through a few times making edits and then finally sent it to the group for feedback and any final changes. Amari noticed a few glitches and I went in and fixed them! We got the show all set up now on soundcloud! Thus ending the radio show experience. Minus the future live tweeting to expect from our account!