Now I am going to start off with the fact that I found this assignment rather difficult. I did not expect it to be when I read the assignment but I had more trouble trying to find some of the particular examples. I also kept debating/rationalizing to myself what was a design element because at first I just thought of it in term of posters for some reason but I went through the resources on the design elements and the types of compositions and tried to push my view of design further and incorporate design.

So I am going to go in order of the list we got for class this week for the design elements to make sure I put them all correctly in from flickr. So! First lets talk about color, now there are a lot of designs that are big on color but for mine I had an immediate thought on what to use. (Throw back to a daily create I used the same flyer for, but got a better picture for this assignment.) I went with the bright red Study Abroad flyers that are pretty common on campus. Whenever I see a flyer with that shade of red I always am reminded of this flyer. The color immediately catches your eye and the big font also helps with this. The limited color palate is also helpful in distinguishing it.

Next was the typography use of design, for this one I took a photograph of a friend of mine’s water bottle. It had two types of font types but the real reason I thought that stood out was because of the particular font types. So the bottle was advertizing a cross partner collaboration with Starbucks and Lilly Pulitzer so in the design choice both companies names are printed in the well known fonts for those brands. Font choices can become iconic and give people immediate recognition with a brand or a stylistic choice. Even though  these fonts were totally different they each relied on the connection to the two brands which I found fascinating. 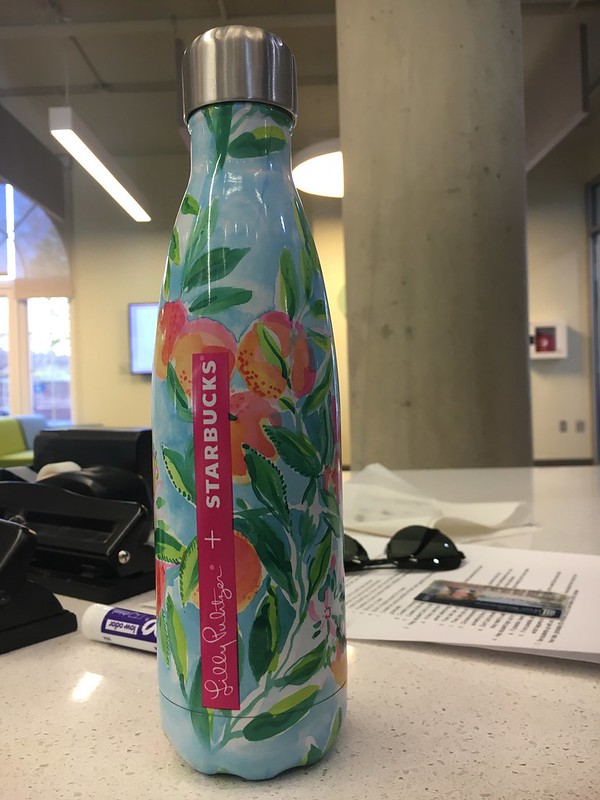 Next was metaphors/symbolism now at first I was at a loss for this one but then I had a great idea. I’m throwing it back to freshman year flyer but I took the picture this week of it. It was for Domain of One’s Own the program all of us are a part of as we blog on our domains. The poster has a graphic of Cloud City from Star Wars and it to me always seemed like a reference around servers and the sky and the abstractness many students/people feel about what a “domain” is. I think it was an effective poster though because I saw it as a freshman and immediately signed up because I was curious. 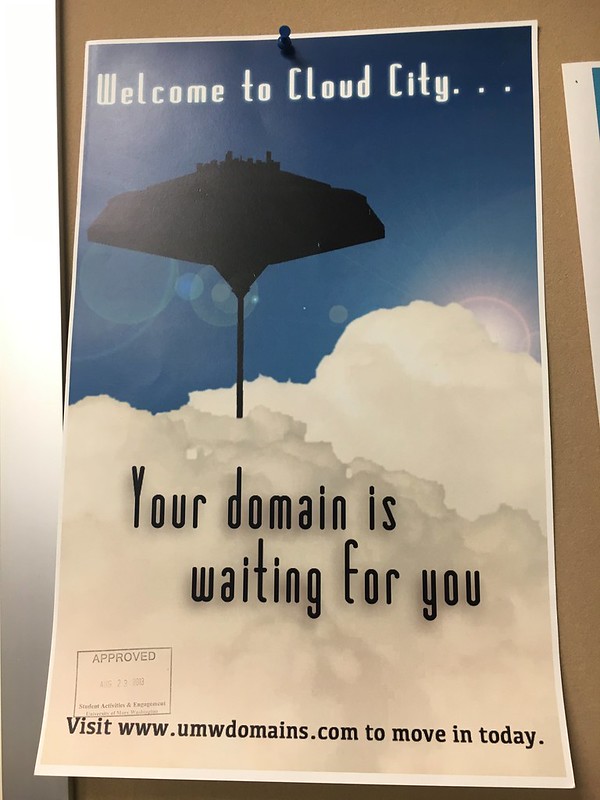 For the minimalism use of space design I went with a t-shirt design that I thought appropriately fit into this category. So this t-shirt was only two colors and only has one section of printed design in the top right corner. Here too the design was pretty basic some laurel wreaths framing a short collection of text that gave the shirt context. It was to the point and still gave a lot of context to the shirt. 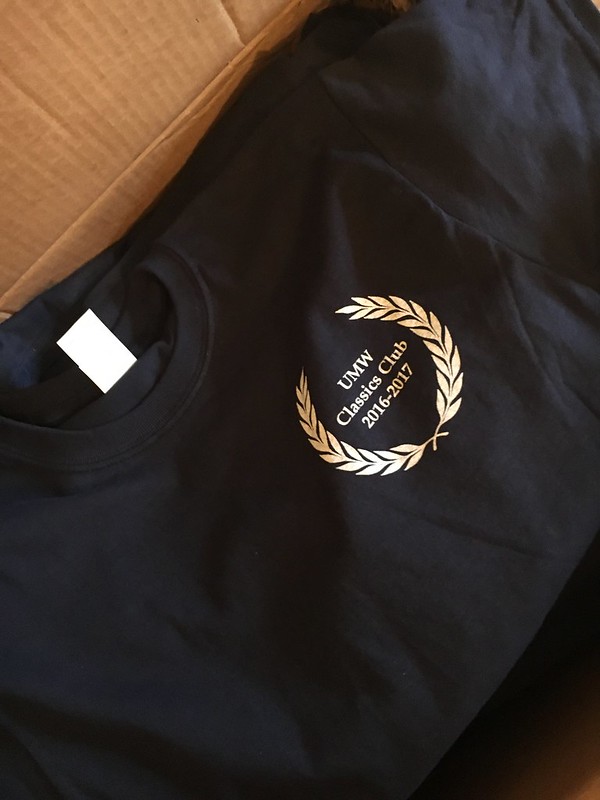 For the photograph on form/function/message I decided to really go out of standard print design. I was sitting in the HCC on campus and looked over at the water bottle filing station and realized that it was a form of design! The fountain had images of how to use it so it was literally showing the function of the object in a way that contributed to the object but did not include any text. So for me that was a great instance were the design was centered around the function entirely.

Next was the balance design. Another flyer inspiration for this category I thought that it had a good balance in the way that the different groups of text were put together in a square. I am a fan of equally balanced text and shapes I felt in this case it kept you attention on the words in the boxes. Clearly I felt a lot of inspiration by campus centered designs but I think that is important because they are designs we come into contact with everyday and that we do not always think critically about or how they are purposefully made.

On to the rhythm design! For this one I chose this flyer below because of the circular dots around the text. I found these dots redirected my eye back and around the text in a circular way. The contrast between the checks in the background and the circles created what to me felt like bubbly movement. (Side note people should enter this contest though it’s great and a cash prize.)

For proportion I came across this instruction manual for one of those lined cutting boards. The reason I found this to be about proportion was the way that the different word phrases were scaled against the overall background image and corner image. Proportion in this sense was indicative of the importance of information and the order in which your eye is meant to follow through and understand that information. 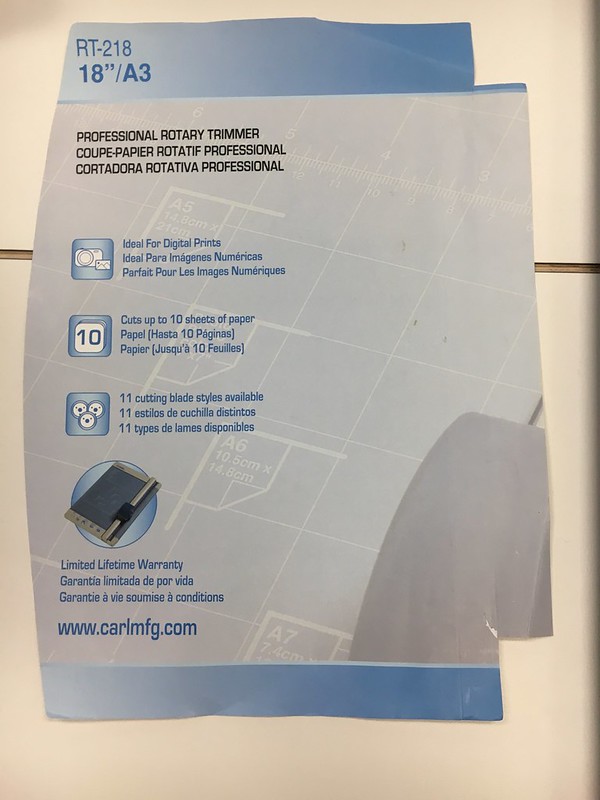 Now bear with me this one might take some explanation. For dominance I chose a fire escape map. Now in the technical sense a fire escape route is a design and it’s purpose is to be as clear and concise as possible. Dominance is about how different parts of a design are weighted and drawing your eye to a specific point. The one of minimal colors limited text and a combination of straight and dashed lines to me accomplished this. I was immediately drawn towards the top text first then towards where the lines were pointed. It did its job thats a efficient design. 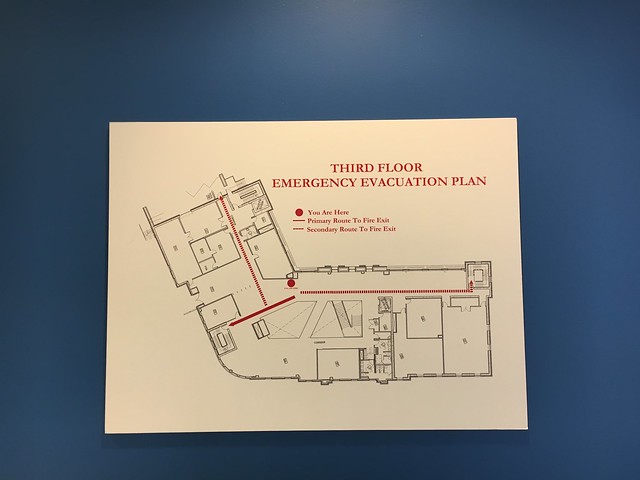 To round it out I looked at this sticker for unity. It is one from my laptop and unfortunately it was impossible to get the picture of just it without tiny overlaps of other stickers. The reason I felt this was a good design of unity was because of the way the whole design centers around the eagle. It frames the context of the text, the date, and sets the color tones. If you took the eagle out you could still have those words and the context but would lose the way that they all connect. In this case the eagle is another reference with Washington D.C. so it ties back to the central point of why even produce the sticker. 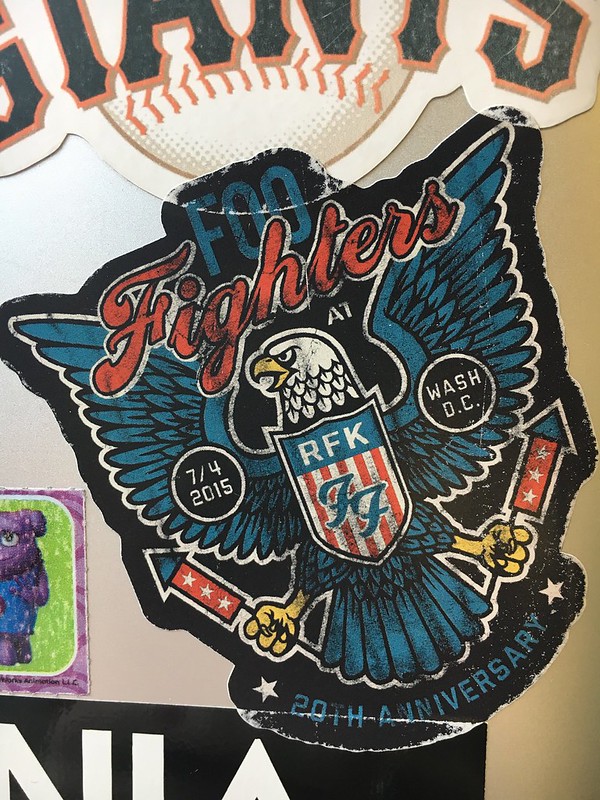