Deciding what projects have been the best so far was incredibly difficult. There have been lots of really cool and interesting projects that I have gotten to see and I’m sure some I missed as well! I try to frequently go through the site and check to see what people are up to but sometimes I think I miss posts or don’t see projects because I mistakenly think I had clicked that link before. (I also tried to search Flickr with the ds106 hashtag and on Twitter to try and get more ideas but it can be hard to find everything.) It was hard to narrow it down to three projects I really thought were amazing but I took a shot at it anyways.

The first project I think stands out is Agent Amari’s DS106 tribune design. I loved the incorporation of her character into tribune’s storyline. She also created the photo design inside the paper so it is like a design in a design. I think it really captures the course theme, her character, and ds 106 ideas! 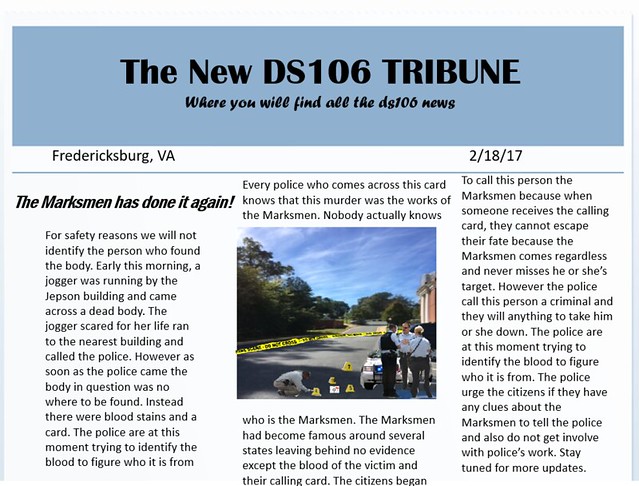 The next I chose was a audio assignment by Agent Hannah. Her assignment was fun and goofy which was really awesome and made it fun to listen to. She also put a lot of effort into doing voices and accents which was cool.

And finally I went with Agent Amari‘s really cool radio bumper.(Okay I picked two works from the same person but really it’s because she’s done really great work and deserves it.)  I really liked a lot of Amari’s audio work. (I mean she made a fantastic opener for the Agents on Air radio show.) I picked the bumper she made because I liked the way she played with the audio in her voice and sounds. She really put great work into it. (Her bumper on sound cloud was being a bit glitchy so here’s the blog link!)

Overall though the class has produced some really cool projects and I am sure will continue to!