Watching the Kurt Vonnegut video on the Shapes of Stories was super interesting to me. It brought me back to those middle school and early high school exercises where we had to drawn out the plot of the story explaining the key points. (Although that was more plot based then the universal ideas that Vonnegut was depicting in his overview of storytelling in general.)

Now the assignment that went along with this video was to take one of the stories from this week and blog about it in connection with this idea. At first I spent time worrying about what exact “stories” were the intended stories we were to analyze. However! Then I remembered that this class is this class. So time to get creative and that any story I picked would not necessarily be wrong. So I decided to look at the storyline of The Hunt for Red October but particularly analyze it through the character of Captain Ramius.

I drew out the way the curve would fall for his story and wrote some short notes along with it. 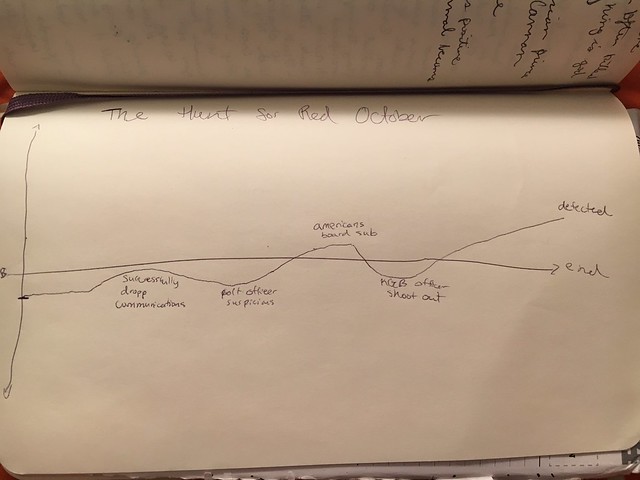 However let me explain it a little more because to make sense of it I felt I had to complicate Vonnegut’s theory. You see I placed Captain Ramius lower on the good to ill fortune. Now technically as Captain and as holding a well regard in society Ramius in terms of comfort of living and society should in theory fall much higher on the good fortune side. However his whole narrative arc surrounds how he is unhappy and looking to defect. So while materialistically he is in a good standing emotionally and mentally he is not. Therefore his character is in ill fortune because he has been pushed to the point of looking to defect and taking others with him that his materialistic and social positives are meaningless to him. The other points I think made sense according with the plot of the story but it was this point that I felt I had to complicate because material wealth and good fortune are not always synonymous.