The Desk of Agent Fawn

I took on the One Shot assignment that is worth 3 stars. I decided to use this assignment along with my character. The idea of the one shot was to take one image and split it into a comic style to convey something. I decided to tweak that a little, when I was playing around with the photos I was not getting a quality that I liked so I actually took several images of the same subject to get a better quality on particular objects on the desk.

I spent awhile trying to decide how to set up the desk and how to create a desk that reflected the personality of my character Agent Fawn. I imaged her desk being very austere however I decided to clutter it up a bit more to point to items that gave more depth to who she is as a character. Among those items were a notepad with letter on it, a redacted set of files, and a broken key. Those were some of the elements I purposefully set up in the scene along with other office supplies each carefully chosen for the desk.

Here is what my first picture looked like when I originally set the desk up. 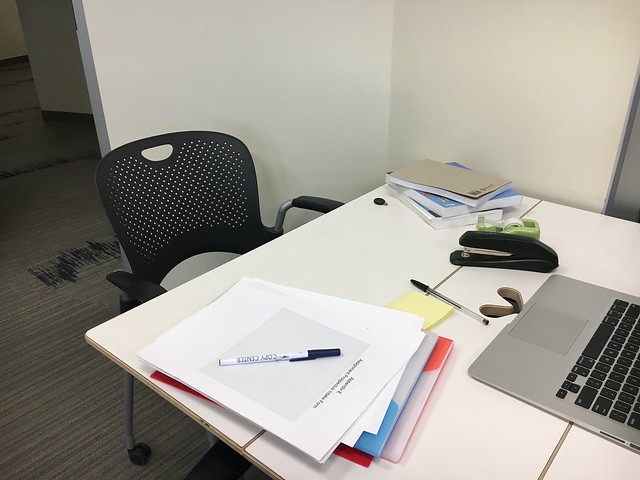 I then brought that picture and several other zoom in shots into Photoshop and worked played around with organizing the photos and creating a narrative around the images. Originally I started with a first shot of the desk and progressed through different zoom ins until I go to a final shot of the same desk. However as I worked with it I found the narrative really seemed to be lacking and not strongly coherent. So I scrapped that idea and instead tried to look at the images as a whole and how they could work together better. After I had gotten a organization I was happier with I messed around with color balance layers and the saturation of the overall image to try and give it a more muted effect than the bright original photograph had. I felt a more somber feeling better suited my agent’s personality.

Here is my final completed version. 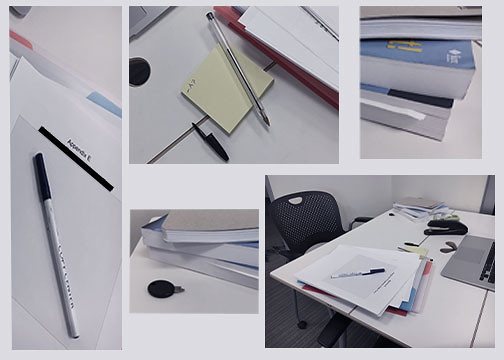