Since my first assignment was a brand new concept I decided to try another more in my previous experience. I decided to pick the Animal’s Doing Funny Things GIF assignment. Before this class I had already created GIF’s for other classes, as well as had the honor of helping with a GIF workshop for incoming freshmen. So it is safe to say that I really like GIF’s and have practice in making them. However I had never made a GIF from my own video so I decided that would be a fun way to take this assignment and do something new with GIFs.

Since the assignment of animal’s doing funny things I used a video of my dog I took awhile back. We had attached a balloon to her collar and she thought it was chasing her. I decided to pull a few seconds from the clip of her trying to see the balloon as it kept disappearing behind her. Once I had decided what to choose for my GIF I opened the video in the program MPEG Stream Clip. MPEG Stream Clip is a pretty simple to use video editor, I selected where I wanted my GIF to start and end and then trimmed the video. Since I knew I was going to use GIMP I chose to export my video into still images at 8 frames a second. (I ended up with 21 frames) 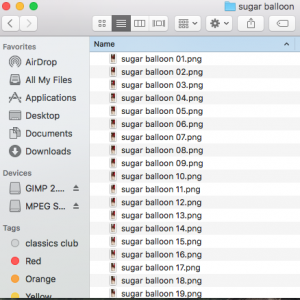 I created the GIF in GIMP which I had not used in quiet a time (usually I use the university computers that have Photoshop on them). GIMP is a great free image editor and you can do a lot with it. To refresh my brain I went to a look at a quick GIF tutorial. After I remembered how to make the GIF, I took all the series of image layers and saved it as a GIF from there. In the end I got a goofy GIF of my dog. Except! I went to upload my GIF and realized I had made a mistake. I forgot that to get a GIF to run on WordPress you have to display it at full size. I had forgotten to scale down my GIF so it was huge and you had to scroll through it. So I had to go back and recreate the GIF again in order to get it to appear in the proper standard size of about 500px.

Then finally I had finished it correctly. So here is Sugar sneezing in fear of a balloon.